Things we hold onto for too long

Last September, I went through a grieving stage after kiddo left home for college, and one of the ways it manifested was to “GET RID OF ALL THE THINGS!! NOW!!!!” (Also move all the furniture.) To give you an idea of the level of compulsion I was dealing with, I pinged neighbors to come over and help me move furniture at 8:30 on a Friday night 🙂 I have some pretty fantastic neighbors.

Here are some of the things I got rid of:

In the instance of the books, I LOVED that series when I first encountered it. I got through book 7? Maybe 8 before I decided the series had jumped the shark and this thing I thought was a fairly feminist forward attempt at fantasy world-building and magic was actually the glorification of giving men back their power. Because only he could save the world. Sigh, gross. Not the kind of messaging I enjoy now. Whatever. There ended up being something like 13 books, with a prequel and other peripheral books. My ex used to buy me the next one when it was released, never noticing I left them on a shelf to gather dust. The dialog over the years as I’ve culled my book collection down and down and down was “but these are hardbacks; and they’re so expensive; and I loved them”. Not honoring the past tense there. Not honoring the symbolism of how I acquired 40% of them from someone who wasn’t paying attention to what I actually liked. Not honoring how that changed over time. But then, if I wasn’t honoring that for myself, was it really reasonable for me to expect that from him?

The chest freezer was small-ish as chest freezers go, but it’s been me and kiddo for 10 years. We never needed it. It tended to store things awkwardly sized for my old side by side freezer/fridge and the kiddo’s frozen waffles. My fridge died about 1 month into covid, so I got a fridge on top/freezer on bottom, so it can hold wider things. And my household now is just me. I don’t hunt or otherwise acquire meat in large quantities. I don’t generally like freezer jam or freezer store things I’ve grown. My needs have changed. Keeping this thing is not honoring my actual needs. Now it lives in a neighbor’s house down the street.

The box of clothes, packed 16 years ago–that was a real shock when I went through our basement shelf storage. A label with my name and the ex’s so the movers knew it was for our house, to be put in the bedroom. And my favorite part – the “-40” meaning, hey Jo, whenever you get around to losing 40 pounds, this box is for you. When I cracked it open, I found a sweater vest that brought a smile to my face and a couple of shorts (of all things) I remember feeling cute in when I was in college. And the rest of it… junk. Either not to my taste or branded shirts I got for free with remembrances of places from a time I’d as soon as never remember much about, funny underwear from the dead years (jesus jammies, yo), plain white tees. For real. This box has been following me for 16 years. Reminding me in its judgy way that I could stand to lose 40 pounds, and it really had nothing in it I’d ever want to wear again because style or see again because some memories are best left lying in the dirt with a bunch of manure on top to encourage lovely new things to grow instead. 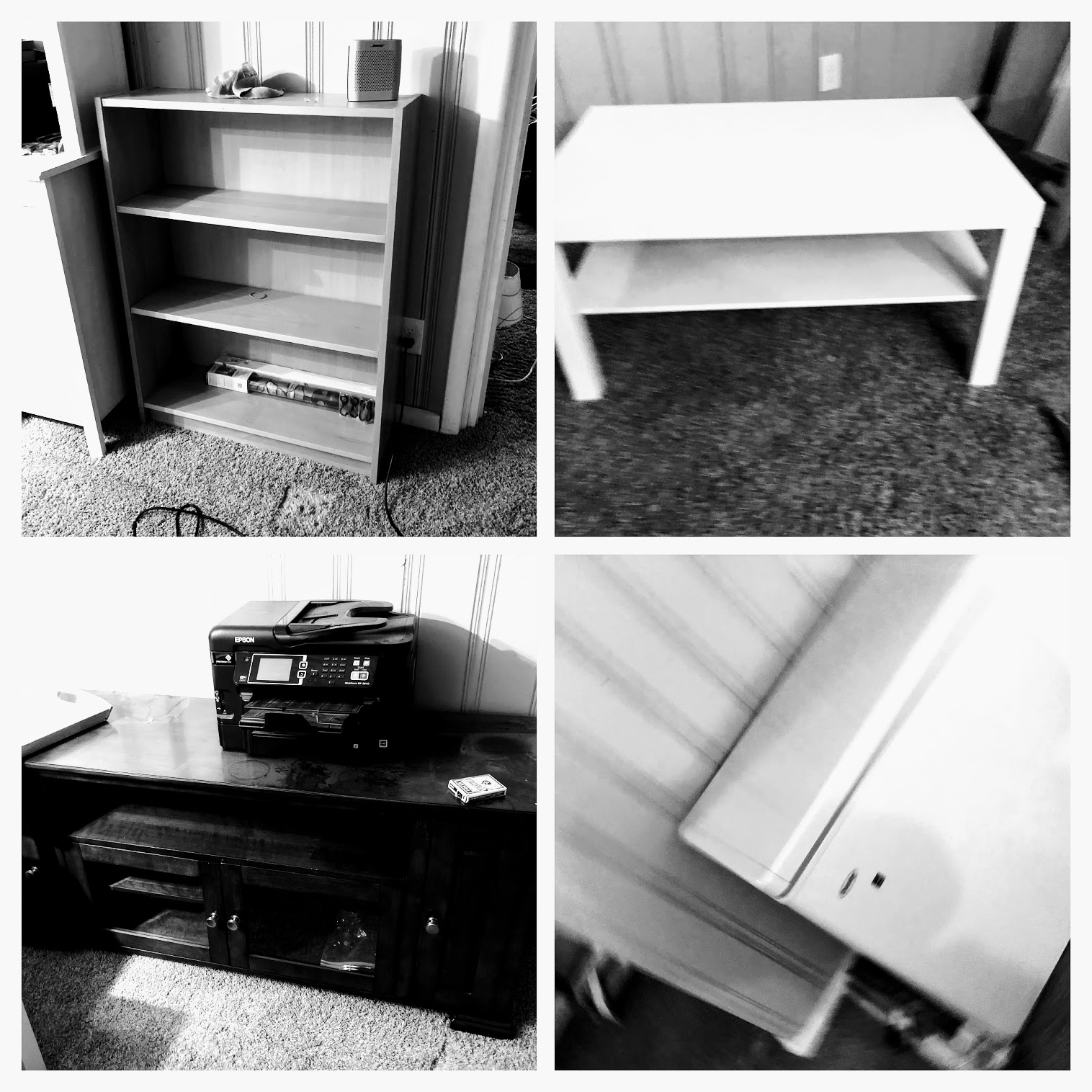 Picture of the gone things, well, except the printer. Need that.

Keeping things that we don’t need when we no longer need them can be as simple as “I haven’t thought about it”. But at least when I do purges every once in a while, it’s a more complicated “Things I don’t want to accept are true now or were true then.”

I spent a few long weekends of runs to goodwill, spamming the neighbor group text on with the “could you use a …”, and dragging stupidly heavy things out of my basement to the front lawn (and wondering who it is exactly who makes them all disappear in the night). Afterward I felt more free, less heavy, less avoidant. I think those things kept me virtual company for a week or so after I dumped them, giving me a little side eye, making me sheepishly acknowledge, “Hey, uh, sorry about keeping you locked in the basement all these years”. And I hoped that the purge left me open enough to confront some of the emotional and mental stuff that I had carefully boxed up and imbued into all those things. I wish that stuff was as easily dealt with as dragging it out to the lawn and letting someone pick it up.

As a side note – I’m now down to just two pieces of furniture I own now that came from the marriage. These huge, heavy, oak bookcases that the first month after the divorce I painted fire engine red on the outside and orange on the inside as the ink was drying on the divorce papers. I think I’m ok with keeping them because they’re huge and beefy and they make the outside light glow bright red on my walls and floor at the right time of the afternoon, especially in winter. I can also acknowledge they symbolize “freedom” to me. But i had a moment this weekend where I thought – “I could get rid of them. I’m not obligated to keep them. They’re just shelves”. And I really felt that deep in my body. I don’t have to keep anything; it’s all just stuff. And to someone else, my shelves are indeed, just shelves.